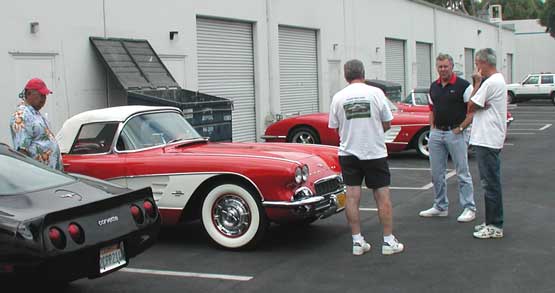 The above pictures were taken during tire kickin’ time prior to beginning the Tech Session.  Since the first tech session the audience is increasing. 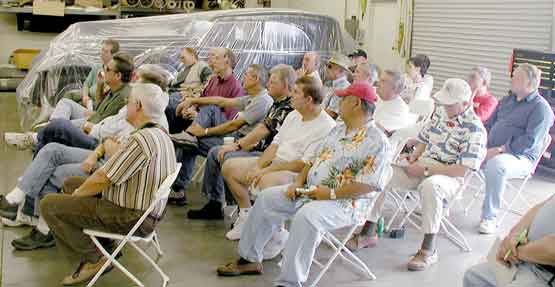 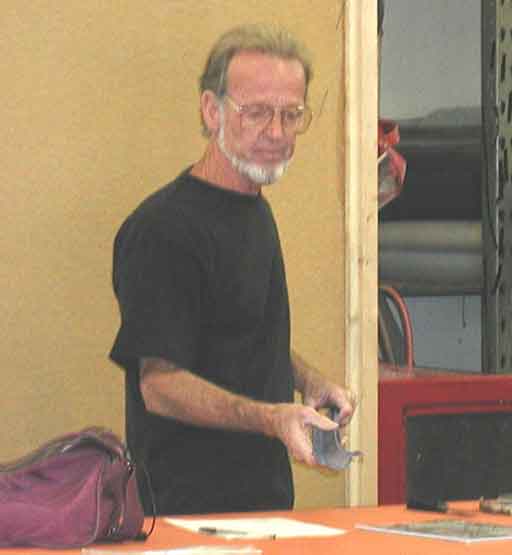 Dan Dempsey has performed extensive C1 body restorations.  He discussed many of the do’s and don’ts on bodywork.  Primarily, the bottom line is that it is a different world working on these fiberglass body’s compared to metal car body’s.

Dan Dempsey was the first “in the fish-bowl” for the morning.  Dan is a “Glassman”, which is also his email moniker, and he began by explaining the characteristic differences in fiberglass over the C1 years.  Dan then got into body sanding, paint striping, body strengtheners, cleaning prior to paint, and on and on.  The more Dan talked the more questions arose.  Clearly, painting a C1 is not for the novice, if you want to get it right. 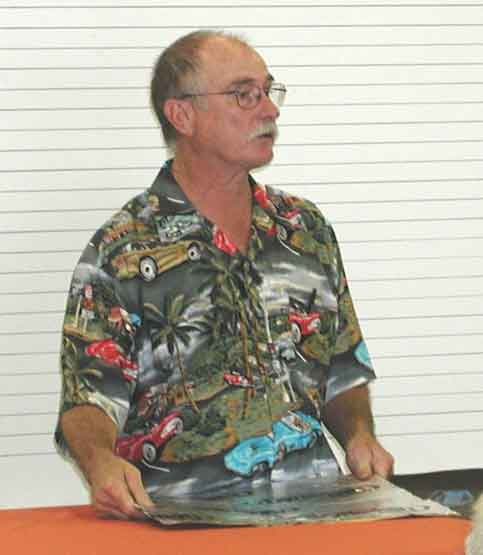 John (Little John) Englehardt, who spoke at tech session #1 about C1 seat construction, continued with a discussion on rubber

weather stripping for sealing doors, trunks, and other locations.  John is extremely knowledgeable with materials  as his business is contract work with automobile companies for show concept cars.  He continued his discussion with noise reduction, heat sealing, old glue removal and reapplication.  John has a business called Interior Concepts and his knowledge is extensive after working in this field for many years. 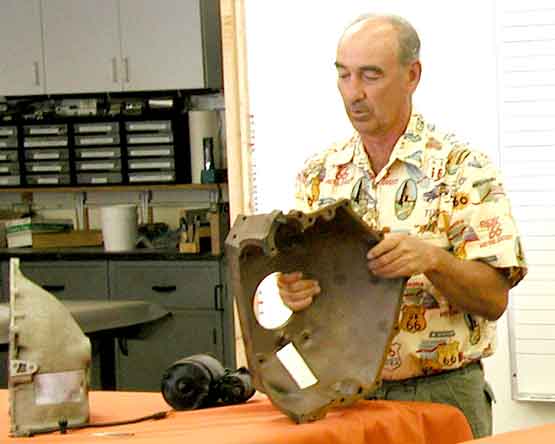 Steve Clifford was the third speaker of the day.  Steve covered topics concerning C1 bell housings and the changes of the C1 years, followed by a long discussion on the C1 clutch linkage configuration and operation, specifics mounting details on the starter interface onto the various bell housings and completed the day with the starter connection to the battery and the support strap which connects between the starter front and fastens to the engine block.
Steve provided the audience handouts describing the various components of the clutch linkage.  The handouts depicted the removal and installation of the large spring on the linkage and the adjustment of the linkage to properly use the spring with clutch pedal operation.  This topic brought many experiences (story’s) from the audience on the removal and installation of this large spring.  The removal process can be dangerous but using a proper technique makes the task very simple. 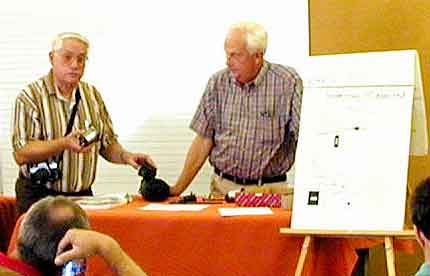 Jim Lundal (right) shares the podium with Larry Pearson while discussing the components of the C1 starting circuitry.

Jim Lundal was the final speaker of the day.  Jim’s topic was formulated around his personal experience and how a problem was discovered and repaired on his C1.  The topic was a review of the C1 engine starting electrical circuit.  Jim had diagramed the starting circuit separately, after removing all the other circuitry, which tended to simplify the presentation to the audience.  Jim also provided a handout to the audience and he explained the circuit component by component  along with the simple diagram.  The problem Jim had repaired, was a 15 year problem of difficult engine starting.  This problem had  finally got to the level of not driving the car for fear the battery would “drag” down before the engine started. The solution was found while removing the starter for rebuild, it was noted that the “green” wire going to the wire harness from the starter solenoid, was missing.  The “green” wire however did exit the harness correctly at the ballast resistor.  At the solenoid, the wire lug remained however the wire must have shorted out 15 years ago (prior owner) and the bare wires were still taped up in the wire harness.  The explanation for this is the green wire routes closely to the exhaust manifold and could have shorted out on starting, or running, and broken the wire.  Since the wire still existed at the ballast resistor one would conclude that this wire could not be the problem until it was noted that the wire was missing at the solenoid.  The “purpose” of this green wire is to put 12V on the wire when the starter solenoid is energized, for easier starting with 12V on the ignition points.  Once the engine starts and the solenoid is de-energized, the engine runs on a voltage less than 12V due to the drop over the ballast resistor.  Over the years of hard starting and the wear on the starter also contributed to “dragging” the battery down during starts.  The worn starter was requiring more battery current and dropping the 12V available at starts.  And, since the green wire was missing the only voltage available at the ignition points was dropped further over the ballast resistor.
Jim also explained the solenoid internal functions and how wear can contribute to additional starting problems. Jim’s description of the C1 Circuitry can be found on this Web Site under TECH TIPS.