This garage tour was as easy as stumbling out my house back door (Jim Lundal, editor).  I had volunteered to assist another SoCalSACC member to modify his 1962 Corvette by installing front Disc Brakes on his (Tony Siragusa, #124) car.  Tony loves to drive his car and sometimes the braking action leaves something to be improved.  Tony’s car was previously quite modified and he is bringing the appearance back to original. Recently, he acquired and installed the folding top framework and installed new top material.  Tony has been seen attending many of our Chapter events, most recently Paradise Cove.
Tony contacted me prior to ordering the brake conversion kit and after some discussion the kit advertised by Corvette Central was ordered (Tony received a percentage off and free shipping).  My experience a few years ago of installing 4-wheel disc’s on my 1956 Bel Air, I convinced Tony to order the pre-formed/bent hydraulic brake lines with the kit.  This decision was correct although installing pre-bent lines was the most time consuming task.  The solid-axle Corvette brake lines contain several 90-degree bends to snake around the front of the engine and motor mounts.  Realizing that bending these lines (with engine installed and body on the frame) would also be more time consuming.  Also, achieving the correct line length for this type of installation would require cutting and flaring the tube ends.  Additionally, with front wheel only disc’s and using a dual reservoir master cylinder, a pressure proportioning valve must be installed to maintain the required hydraulic pressure to the disc’s and rear original band/shoe brakes.  The original 1962 brakes, like most cars of the era, only had a single hydraulic line from the master cylinder to all the wheels.  Tributary lines are then used off this main line to each wheel.
Corvette Central’s (CC’s) kit discreetly places the proportioning valve to the rear of the front cross-member below the front of the engine.  This valve position exhibits less parts up near the master cylinder which would be visible, however it does require more brake lines to be routed underneath the car.  A good reference is the pictures in the CC catalog. 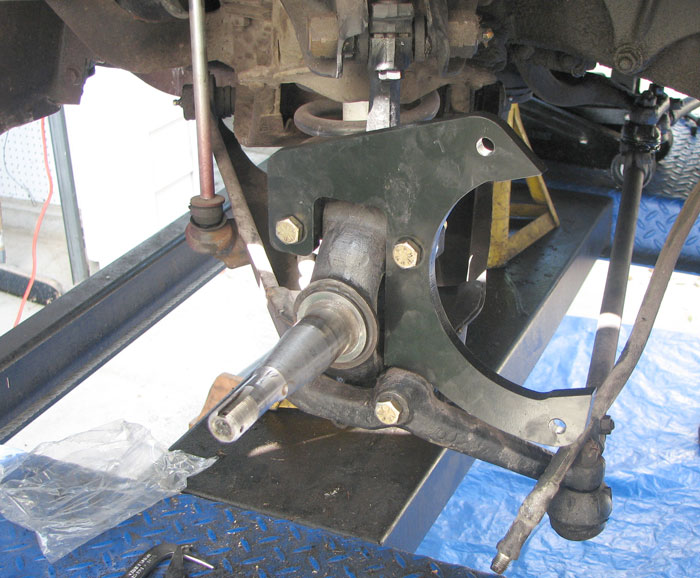 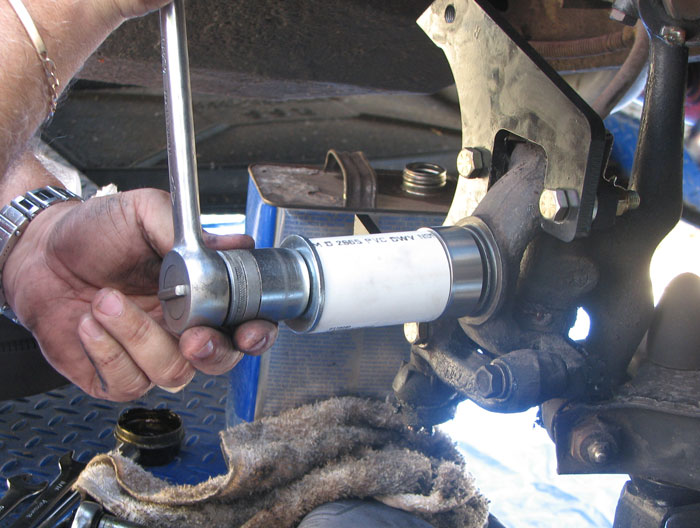 I suppose having myself in the group was because I have a car-lift and the history of doing this task once before.  Incidentally, (personal opinion) I cannot imagine doing this brake line installation using jack-stands and laying under a car.  CC advertises this job to take about 5 hours and I consider our two days and about 14 hours fairly normal.

Removing the original brakes with backing plates and installing the new hardware was only a couple hours.  All parts are supplied along with new tapered roller bearings and brackets to mate the hardware to the original spindle’s.  The brake lines are another story.  The remainder of the first day was spent removing original brake lines and fighting access to install the new lines.  One can visualize that this task could be a “piece of cake” with the engine removed and/or the body off.  The CC kit does contain all pre-bent line sections including the line which attaches to the original line at the rear of the car for the rear brakes.
The hub/disc assembly supplied does need to have new bearings installed.  The bearings are supplied in the kit.  The currently installed inner and outer bearing races must be removed and the new races installed in each new hub assembly.  We used the hammer and punch technique and hammered in the new races.  The new inner hub bearing does require a bearing adaptor to be slipped (an interference fit) over the existing spindle.  A installation picture appears on the previous page.  A PVC pipe (white in the picture) also slips on the spindle to assist pressing the bearing adaptor on the spindle.  A large washer is supplied and the spindle/hub nut can be screwed on the spindle to force this bearing adaptor to its proper location.  (See picture).

Tony Siragusa, being the owner of the car, decided to use DOT 3 hydraulic fluid instead of converting to DOT 5 silicon brake fluid (sorry, Larry Pearson).  After a normal hydraulic fluid bleeding procedure and the clearance adjustment of the original back brake bands, the brake pedal travel was short and the pedal feel was hard.

Overall the installation is relatively straight forward and I believe most individuals, with reasonable mechanical experience, could do the job.  The instructions supplied took some discussion and more in-process pictures would be an advantage to the job, i.e. installing the spindle inner bearing adaptor, removing and replacing hub bearing races, etc..  Undoubtedly the longest, dirtiest and frustrating part of the job was installing the brake lines but when completed, we experienced no leaks.  The “thought” did cross my mind, after completion, to remove the motor mounts which bolt to the frame (not the motor mount that bolts on the engine) and support the bottom of the engine from below.  This would provide additional access for installing the brake lines.  Just a fleeting thought! 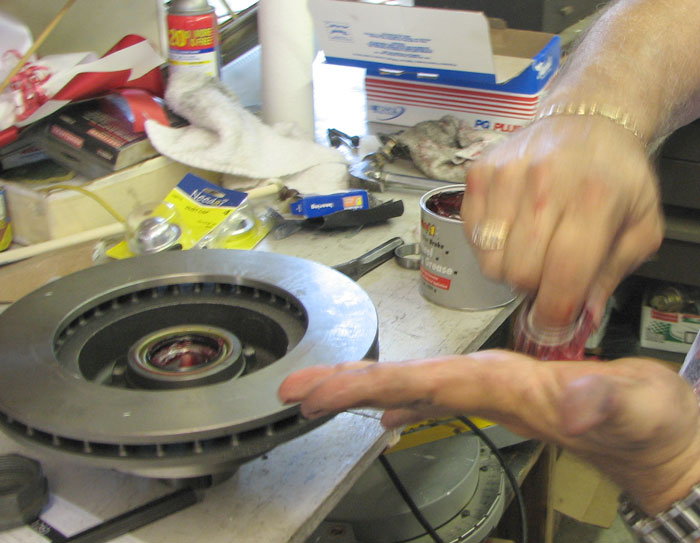 New Bearings and races are installed on the disc assembly. 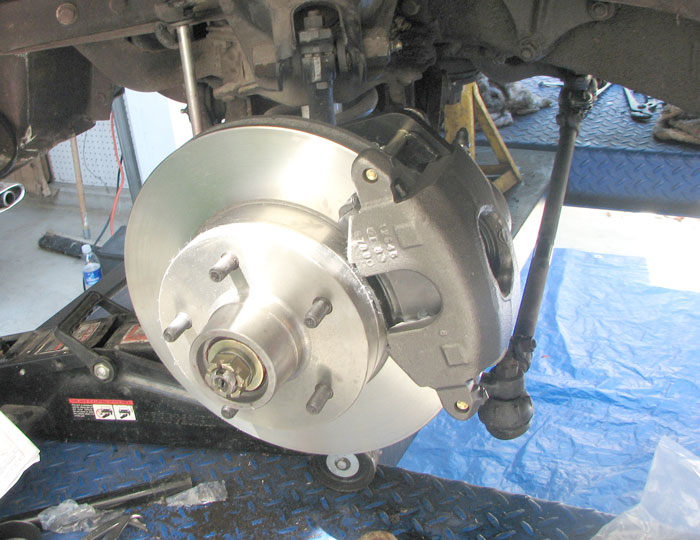 The completed installation ready for the stock wheel.